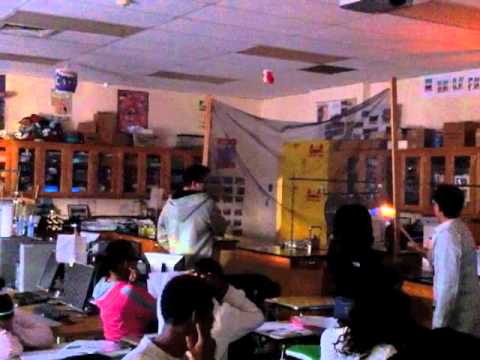 Proviso East High School chemistry teacher Glenn Lid is not afraid to make a mess in his chemistry lab. And he's not afraid to put on funny hats, make jokes and take his students out of Room 207 in Maywood and down to the Chicago River to help clean it up. He also takes them to wealthy schools such as Niles West in Skokie to show them environments they may never have seen.

Lid, a 34-year veteran of Proviso East's classrooms, is featured in a new book telling the stories of some of the most innovative teachers in America.

American Teacher: Hero in the Classroom was released Tuesday by Welcome Books in New York. Author Katrina Fried interviewed 50 teachers across the country, and lets them tell their stories in their own words. She also interviews former students, who tell about the influence of the teachers on their lives.

Lid, who was inducted into the National Teachers Hall of Fame last year, and won a Disney teachers award in 2004, compares his teaching to a form of exploration. Author Fried describes him as, "part mad scientist, part parental figure, part life coach."

"It's my mission to infuse as much positive energy, humor, creativity, technology and inspiration into my lessons as I can," Lid said in the book. "I think of myself as an explorer of human beings. I have discovered some incredible kids who go on to do incredible things. That's what keeps the flame going."

Lid was one of the first ten teachers Fried interviewed, and she said he set the bar high for the project.

"He's really an amazing figure and he has taught so long in a challenging urban environment, but he manages to open the doors for students and let them dream big," Fried said.

Lid said his father, a printer and later a custodian who died when Lid was 24, is a role model.

"He was always there to redirect me, encourage me, dust me off after failing and send me back to try again," Lid said in the book. He has coached baseball at the high school for 21 years and wrestling for 34 years. He points out that teaching in underperforming schools is difficult and takes a lot of commitment from teachers.

"Many of our students are lacking male role models in the home, a fact that is especially significant for the boys," Lid said. He makes it his job to break through to students.

"I have to bring persistence and establish relationships with my students," he said. "So many of my students have no fathers, but as their teacher I can give to them the same learning opportunities and experiences my dad provided me with."

Lid and his wife (also a teacher) have no children of their own, Fried said.

"But I think all of his students are like his own kids."

Lid talks about a discussion of radioactivity in his honors chemistry and AP class. He realized that "90 percent" of his students had no understanding of the damage done to human beings by radioactivity used in careless ways or as a weapon.

To bring home the horror of the atomic bomb in Hiroshima, Lid worked with the Peace Memorial Museum in Hiroshima. Students Skyped with a survivor of the Aug. 6, 1945 bombing and were allowed to ask him questions. Lid believes the power of chemistry and physics become relevant to students with these kinds of experiences, as well as the true exploratory nature of science.

A 23-year-old former student says of Lid in the book, "He stressed the importance of ethics, scholarship and personal integrity."

Lid said he's seen teachers, superintendents and principals come and go in his 34 years at PEHS.

"It takes a special dedication to stick it out at a school of need, a special love and caring, because you are going to be tested and frustrated in lots of different ways."

The book was created to "give teachers a voice in the education debate," said Fried. Her previous book was Everyday Heroes: 50 Americans Changing the World One Nonprofit at a Time. Fried said she worked closely with the book designer to make a coffee table-style book that might be marketed as a gift for new teachers, veteran teachers, parents and others in education.

"I was amazed how the teachers I talked to wanted to know about what other teachers were doing. [Good teachers] are so busy working on their own classes, they don't get many chances to see other classrooms and best practices."

Welcome Publishing made the project with lots of internet resources, said Fried. The book is more than a book, with lots of online reading lists from teachers interviewed and other favorite links and resources.

There's even a video of Lid with testimonials from his students and scenes from Lid's "out of the box" classroom.

When I heard that Mr. Lid was inducted into the National Teacher's Hall of Fame last year, I was not the least bit surprised. He epitomizes the role of educator. He really connects with his students and is able to educate them to where they really enjoy learning. He has a true passion for teaching. I know this first hand because I had Mr. Lid as my Chemistry teacher and feel truly blessed as a result of it!

Mr. Lid was my freshman biology teacher back in 1982, and I still have such fond memories of that class. As a current teacher, I know that the passion and dedication that he has always shown is needed and appreciated. Thanks Mr. Lid for inspiring so many of us!

One of the greatest Chemistry teachers of all times. Mr. Lid is the reason I developed an authentic passion for science inside of the classroom at Proviso East classroom into the pursuit of my teaching career and beyond. He is the catalyst that models excellence in academics and athletics. Mr. Lid goes all out on limb for students & colleagues inside and outside of the classroom because he knows exactly where the fruit is! Thanks for pushing me LID! Love LUCAS!

Mr. Lid is an excellent teacher. This honor fills my heart with pride, and makes me happy to be associated with such a great individual. Go Mr. Lid!

I am so very proud of you!! I am honored to have grown up watching you on your journey of being a teacher - you are my inspiration!

Glenn, You are great!

Mr. Lid inspires teachers as much as he inspires his students. When I taught at PE, I felt like Lid was a subtle mentor-- allowing me to be myself while also nudging me in the direction of betterment. Congrats, Mr. Lid!

Fantastic article! Congrats to Mr. Lid he exemplifies what all teachers aspire to be! He is a local treasure! Just reading this, you wish you had him as a teacher or your kids!

Congrats! There are teachers out there that Care about their students! I hope Proviso East does not decide to fire him now. Since they do this to every teacher that is aknowledge for their work...

Wow. What a wonderful honor. Sometimes we forget all the positive things that are Proviso East.

Mr. Lid, Congratulations! As a faculty member, you are what we all hope to achieve in our classrooms as well as cultivating those relationships with our students. You have done so much in your career and inspired so many students; I only hope in your retirement, that you are able to mentor staff and students alike. I will miss you and Proviso will miss one of the greatest!!! All the Best, Jessica

This is such a well deserved honor! As a former co-worker of Mr. Lid, he was a mentor to those of us who needed to connect with both students and peers at PEHS. He was, and still is, an ispiration to me! Congratulations!!

Mr Lid gets to school early about 6am each school day. He is dedicated,hard working, and makes the best of limited resources. His teaching earns him respect and trust by students. He coaches baseball and still has time to help other teachers and talk objectively about Proviso East.

On: Rev. Julie Harley deals with her...

My Grandmother lived in Forest Park and always talked...

On: We remember Otto's

I am so excited by this interview and for the future...

On: New D209 superintendent comes from...

Thank you Michael for taking the time to do an...

On: New D209 superintendent comes from...

The Chi is actually one of my favorite shows. I'm...

I am glad the Village shut them down. I don't...

Citizens of Forest Park, please sign the petition to...

I want to say to Dr. Henderson: Welcome to District...

On: D209 board hires new superintendent

what is with ppl being rowdy at funerals? next up.....

By Petra B Donyale

On: Eighteen vehicles given citations...

Check out the Lantern Haus's response on Yelp to...